Ariston is one of the main protagonists of the series

Ariston wants payback after his colony was destroyed by The Corvus Imperium. But he won’t be facing Corvus alone. He’s joined Team Veredus and is ready to fight the good fight.

He was raised by Feronia. He owns a robot Mangle that he is best friends with. 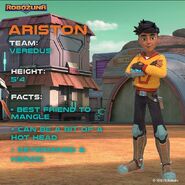 Add a photo to this gallery
Retrieved from "https://robozuna-tv-series.fandom.com/wiki/Ariston?oldid=1112"
Community content is available under CC-BY-SA unless otherwise noted.